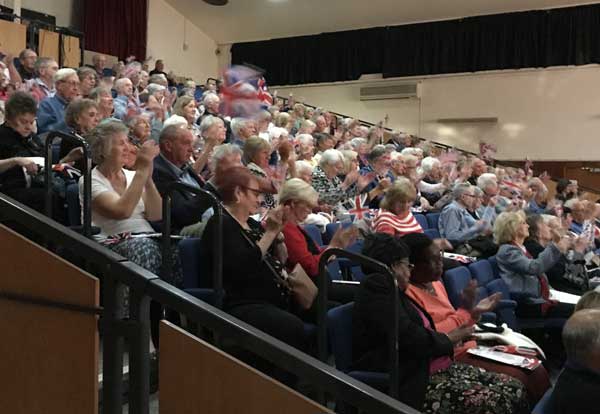 The other major ingredient in our successful Last Night of the Proms charity concert at the Winston Churchill Theatre were the magnificent flag waving, singing audience 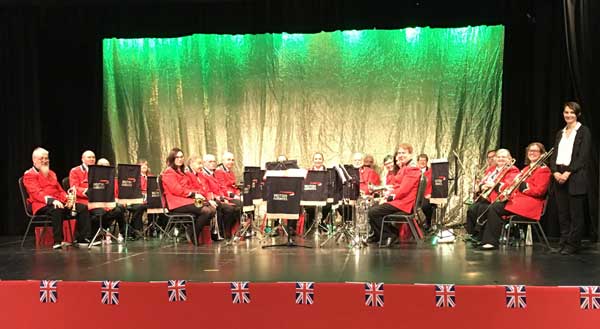 The 2019 concert in aid of local charities at the Winston Churchill Hall, was a great success with wonderful performances from the British Airways Band pictured above, under their Director of Music Rosmarie Coetzer, soloist Ruth Fortey and the Signature A Capella Singers. The club are also very grateful to the audience who helped us to raise funds and joined in enthusiastically. 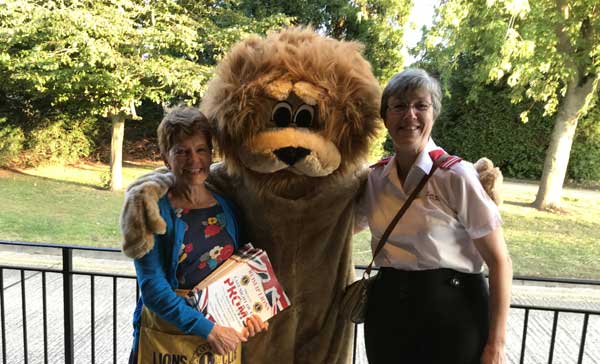 Rory the Lion made an appearance at Ruislip Lions Last Night of the Proms concert held at The Winston Churchill Theatre Ruislip, seen here with volunteer programme seller Joan & a member of British Airways Band 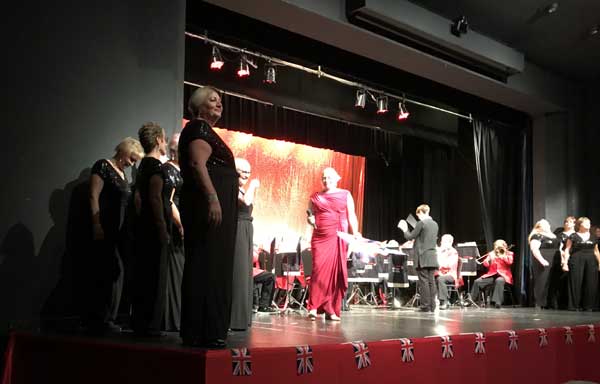 The concert was a great success with The British Airways Band, and also due to the participation of the award winning Signature A Cappella Singers & Soloist Ruth Fortey former BBC Choirgirl of the year 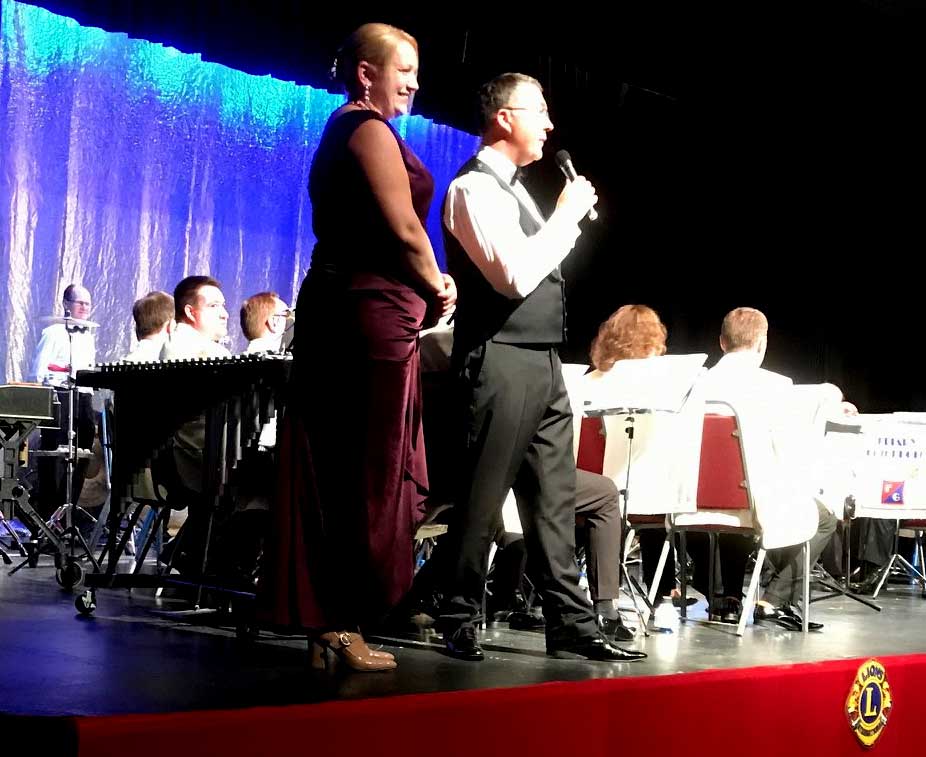 Our soloist for the concert on the 1st September in  the Winston Churchill hall was Ruth Fortey who charmed the audience with her absolute clarity during the evenings performance. You can listen to Ruth here https://bit.ly/2QjHPok 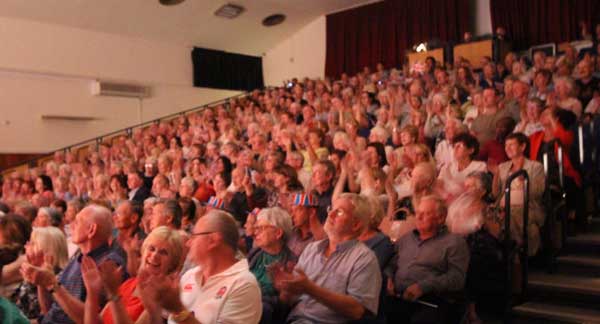 There was a packed auditorium in the Winston Churchill hall for the concert and Ruislip Lions are extremely grateful to everyone who came on the evening and helped us to raise funds for Lions nominated charities. 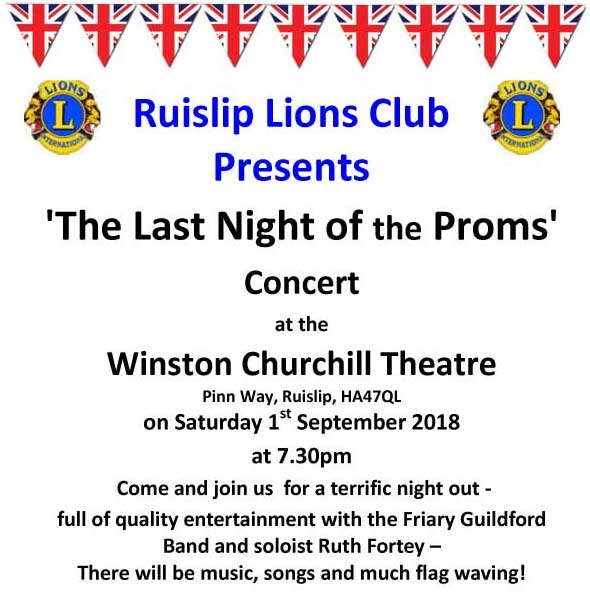 Tickets available from
www.hillingdontheatres.uk 01895 250615
or in person from Compass Theatre (opposite Ickenham Station), open Tue-Sat 10.30am to 5pm 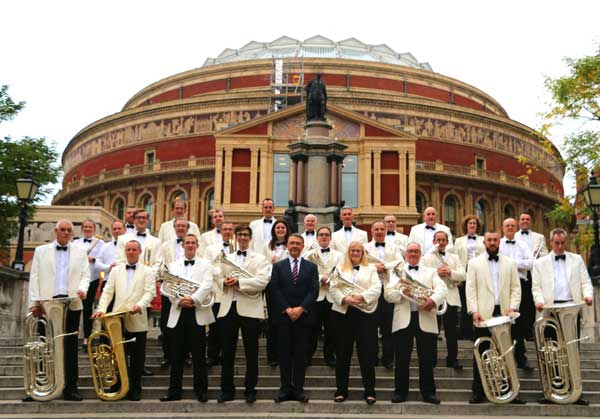 Ruislip Lions will be returning to the Winston Churchill Theatre on the 1st September for ‘Last Night of the Proms’. Once again it will be featuring the award winning Friary Guildford Brass Band, and the guest vocalist will be Ruth Fortey who has recorded professionally and has been a BBC chorister of the Year. The concert will start at 7.30pm, tickets are £13.50 and £10.00 for Children/Students.  Come along and enjoy a terrific night out, quality entertainment and much flag waving!

Friary Guildford Brass Band 2018
Formed in 1983 with initial support from the Friary Meux brewery, the Friary Guildford Brass Band comprises 28 amateur musicians under the musical direction of Chris King, formerly Bandmaster of the Grenadier Guards. Friary was promoted to the Championship (top) section after winning the First Section National Championship in 2010, the only band from London & Southern Counties ever to have won that title. Since then, the Band has gone from strength to strength, holding the title of Regional Champion for the past four successive years and qualifying for the National Brass Band Championships of Great Britain at the Royal Albert Hall for the past six consecutive years. Only eight other bands in the UK can match this record. Friary won the Most Entertaining Band award at its debut appearance at the Butlin’s Mineworkers Contest in 2015 and again in 2017, and was also invited to play at the prestigious Brass in Concert contest in The Sage, Gateshead, in November 2015. The Band is currently ranked 26th in the world (courtesy of www.4barsrest.com).

With a broad repertoire of musical genres, Friary has played with internationally acclaimed soloists such as David Childs and Mark Nightingale, and in May 2015 the Band’s CD, Letter from Home was featured on BBC Radio 2’s Listen to the Band programme. During the past two years Friary has staged joint concerts with three of the world’s top bands: Fairey, Brighouse & Rastrick, and Cory, as well as with the North East Hants Area Schools’ Bands where two of Friary’s principal players started their banding careers.

Over the years, the Band has played at a wide range of prestigious sporting events, such as the British Grand Prix, RBS Six Nations and Gillette Four Nations Rugby internationals, QIPCO British Champions Day at Ascot and Sandown Park races. Friary players teamed up with Guildford’s Pranksters Theatre Company in 2013 for their stage production of Brassed Off at Guildford’s Electric Theatre. Around Christmas, the Band can be found playing carols in and around Guildford, to raise funds for the Kent Surrey and Sussex Air Ambulance Trust, as well as staging an ever-popular concert for the British Heart Foundation. Guildford’s Remembrance Sunday parade is always led by the Band, with its principal cornet player sounding The Last Post and Reveille in Holy Trinity Church and at the War Memorial in Castle Grounds. Friary Guildford Band was honoured to receive the Mayor of Guildford’s Service to the Community Award in 2015.
For more information about the Band, please visit www.friaryguildfordband.co.uk. Friary Guildford Brass Band is a registered charity no. 1137290. 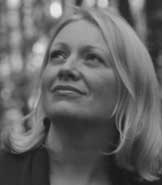 Our guest soloist is Ruth Fortey. A former BBC Choirgirl of the Year, Ruth has sung professionally for nearly 30 years. Credits include Songs Of Praise, the Birmingham International Tattoo, BBC schools programme Stop And Think and concert tours with goth-rock band Sarah Fimm and alternative-rock singer Chris Emerson around New York and New England. Recordings include the single Flying Free and albums Perhaps Love, Sweet Little Jesus Boy, an EP of originals Walk Me Home under the band name Shed Light and the Easter musical Born For This. Ruth writes and records with Wiltshire-based film composer Jason Chatwin and has penned songs for Spanish artist Pau Sastre. She leads six children’s choirs, arranges all their music, and conducts their numerous concerts in West London.

Our concert on 29th October was a great success, with more than £1400 raised for our charities. The audience enjoyed excellent performances by the  Friary Guildford Brass Band  and  Harrow Apollo Male Choir who played and sang many pieces and songs from the Broadway and West End shows.

Many thanks to all who attended.

Below are some photos from the night. 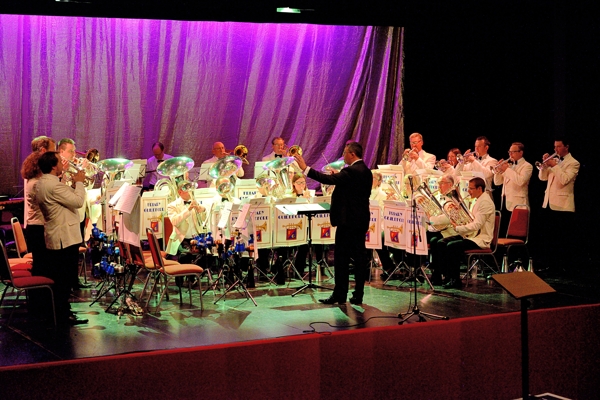 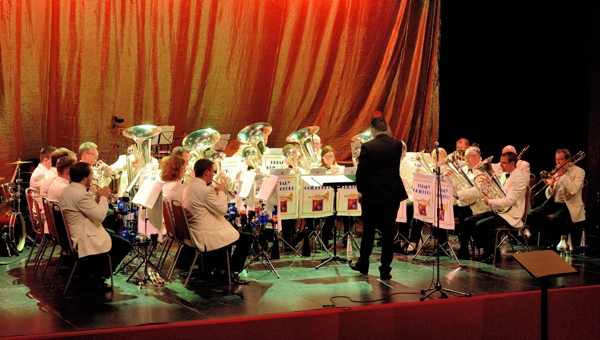 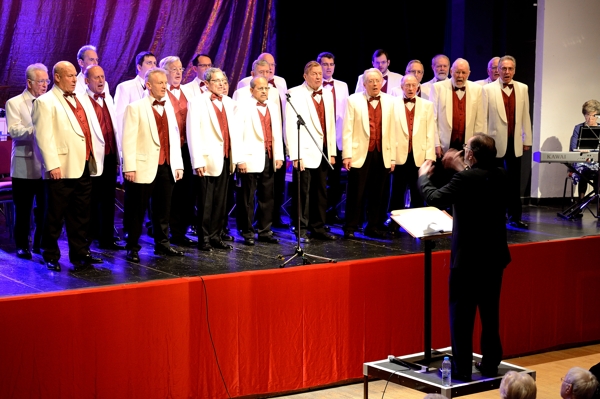 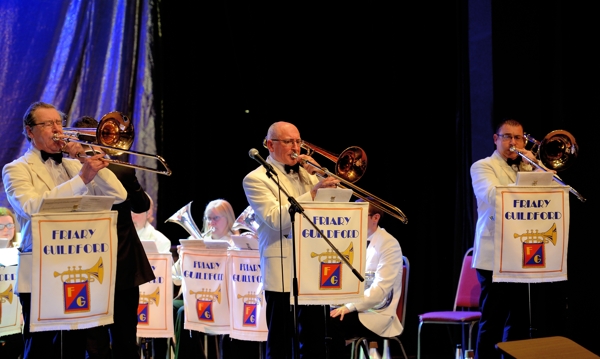 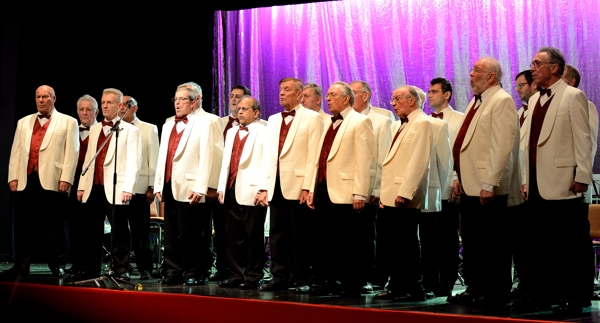 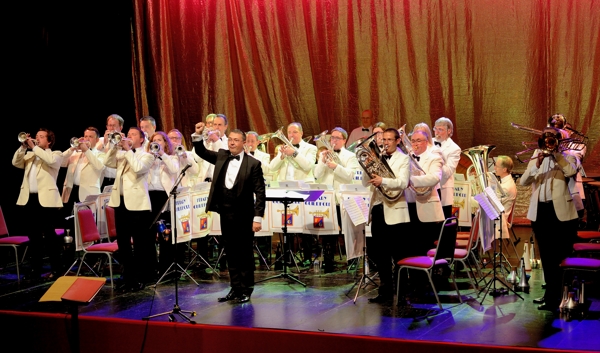 Ruislip Lions Club are presenting a concert – ‘Broadway meets West End’ featuring the Friary Guildford Brass Band. The Friary Guildford Band is a traditional brass band based in Surrey, but travels across the country to entertain audiences at a range of concerts, events and contests. You may have seen them at our ‘Last Night of the Proms’ concerts. Conducted by musical director Chris King, Friary Guildford Band has enjoyed an excellent run of success in brass band competitions. In March 2016 Friary Guildford cemented its position as the South’s number one band, retaining the title of London & Southern Counties Regional Champions at Stevenage, and securing a return to the National Finals for the fourth successive year.

Appearing with the Friary Guildford Band will be the popular Harrow Apollo Male Choir who have been entertaining audiences for over 75 years. They perform around London and South East England but have sung in concerts in the USA and Europe.

The performance will start at 7.30pm, You can purchase your tickets using credit or debit cards. Tickets are £13.50 each with concessions £10.00 for students/children. To book your tickets please contact The Compass Theatre Booking Office on 01895 250615. Tuesday – Saturday 10.30am – 5.00pm, or go to www.hillingdontheatres.uk then to What’s on? and you will find our concerts listed.

Rockin’ Around The Christmas Tree

We had two super sell-out performances of our Rockin’ Around the Christmas Tree concert on 12th December which raised in excess of £3,500. Many thanks to all who attended and a special thanks to Judy McPhee, Artistic director and Producer of the show and director of JAM2000 Performing Arts & Agency. Judy convinced us to add a matinee performance this year giving more families the chance to enjoy the entertainment and dramatically boost our fundraising effort.

Many thanks also to City Grove and the Johal Family for their generous sponsorship without which the show would not have been possible.

JAM2000’s singers and dancers, who train at The Windmill Studio Centre in Ruislip Manor, wowed audiences with their stunning costumes and polished routines incorporating the glitz and glamour of Hollywood, the mystery and magic of Disney and the rock, pop and hip hop funk music of the moment. 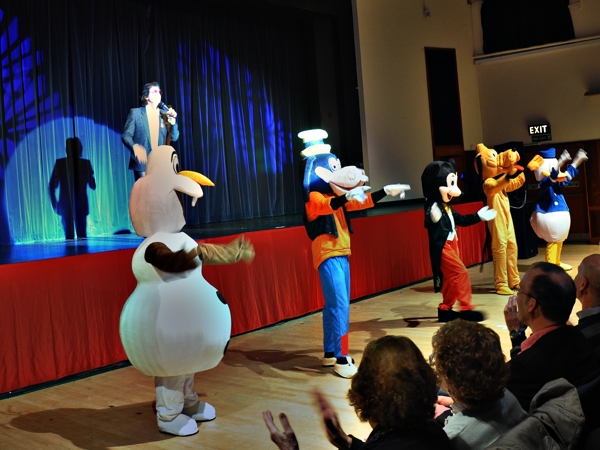 The variety show was billed ‘From Rock to Opera’ with the opera element provided by the spell-binding, classically-trained young soprano, Francesca Mepham and Up and coming 17-year-old pop singer Charlotte Donovan performed with passion and pazazz.

Hillingdon Youth Big Band had the audience singing and dancing in their seats as did show compere and performer Kin Kelly with his toe-tapping tribute to the King himself, Elvis Presley. 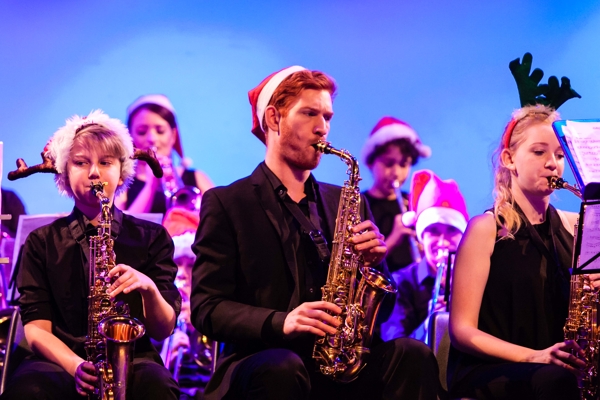 The most breath-taking performance came from UK National Champion gymnasts and strong GB team contenders Callum and Kieran, from Hillingdon Gymnastics Club. Santa in his sleigh rounded off the show. 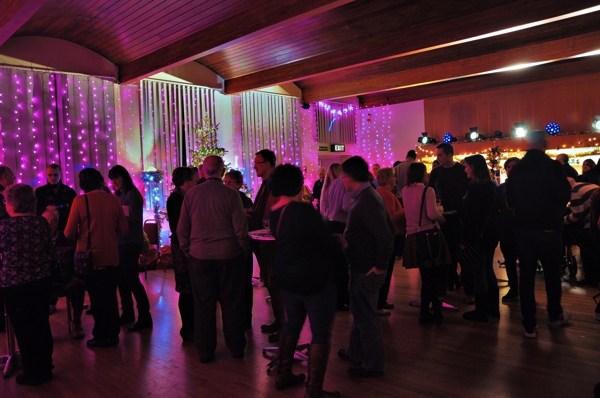 Last Night of the Proms

Our “Last Night of the Proms” concert on 19th September was a great success and was well attended. The Friary Guildford Brass Band entertained us, along with soloists Cherish Bristow and Jeff Stewart. Proceeds for the night amounted to £2,278. Many thanks to all who attended.

Below are some photos from the night. 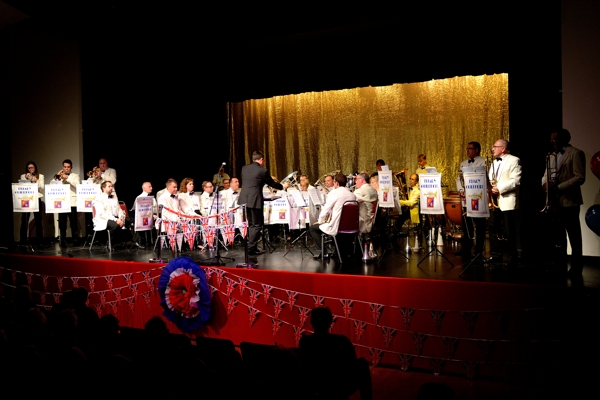 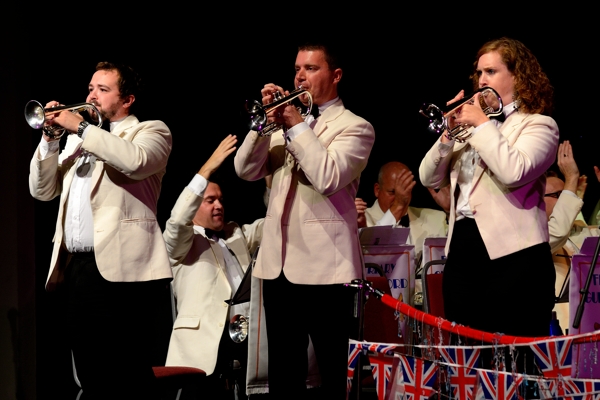 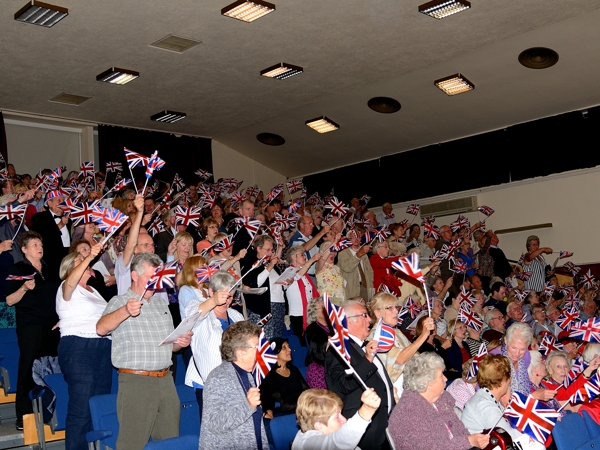