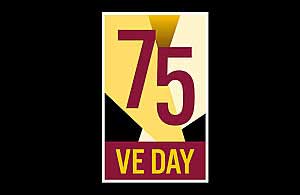 As people are no longer able to attend national and regional VE Day 75 commemorations or events due to the Covid-19 pandemic, The Royal British Legion is playing a central role in the delivery of a range of remote activity for people to participate in from home. This includes a VE Day 75 livestream, national moments of Remembrance and thanksgiving and a learning pack for young people.
The Legion is inviting all its members to join together in encouraging people of all generations and communities to take part in the activities on 8th May and pay tribute to the service and sacrifice of the entire Second World War generation. As society faces some of the most challenging times since of the Second World War, it is now more important than ever to unite in recognition of service to the nation, just as communities did 75 years ago.
Royal British Legion Schedule
1100-1102          – Two Minute Silence
1115-1200          – The Royal British Legion VE75 Livestream
2000-2110          – VE Day 75: The People’s Celebration, BBC One
2100                     – ‘We’ll Meet Again’ Singalong
Two Minute Silence
The Legion is calling on people to join in a national moment of reflection and Remembrance at 11am on Friday 8th May and pause for a Two Minute Silence, not only in recognition of the service and sacrifice of the Second World War generation, but also to reflect on the devastating impact Covid-19 has had on so many lives across the world.
People are invited to take part in the Silence in whatever way they feel appropriate be that standing at their window, stepping outside their home, whilst remaining distanced from others, or taking the opportunity for a quiet moment of reflection. To build momentum towards this important moment, please share this with your communities and encourage everyone to come together in Remembrance at 11am.
The Royal British Legion Livestream
Following the Silence the Legion is hosting a VE Day livestream, sharing stories and memories from those who served and sacrificed during the Second World War. The Legion is inviting people to grab a cup of tea and join us for the livestream as we bring the World War Two generation together with today’s generation to chat about their experiences.
Hosted by TV presenter Sonali Shah, the programme will feature contributions from social historian Julie Summers and cook and influencer Melissa Helmsley. The stream will be live from 11.15am on the Legion’s website rbl.org.uk/veday75 and Facebook page
www.facebook.com/OfficialPoppyLegion.
VE Day 75: The People’s Celebration BBC ONE:  20:00 – 21:10
To mark the 75th anniversary of VE day, in these unprecedented times, the BBC in partnership with The Royal British Legion will honour and celebrate the World War Two Generation with an evening of memories and music.  Featuring some of those who remember this historic day, together with Britain’s favourite performers who will entertain us with popular songs of the era.  In a fitting finale at 9.00 pm we will see the nation unite for a very special rendition of “We’ll Meet Again” as we all give thanks to our veterans and remember our loved ones.
‘We’ll Meet Again’ Singalong
Lyrics available on The Royal British Legion website
www.rbl.org.uk/stories/ve-day-singalong
VE Day 75 Learning Pack
Designed for 7-14 year olds the learning pack includes first-hand accounts from the Second World War generation, veteran interviews and a range of activities to allow families to explore and commemorate VE Day 75 together. People can follow the activity on social media using #VEDay75 and #VEDay75Live during the livestream.
There are many parallels between the struggles of the Second World War and what the world is going through today, and looking to the Second World War generation, their resilience and determination, helps inspire today’s generation in these difficult times.
Dimitra Nikolakopoulou
Royal British Legion Headquarters Membership Communications Officer