THE COMEDY OF ERRORS by William Shakespeare
24th June 2017 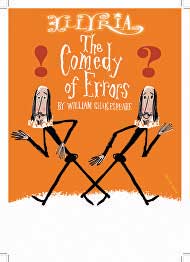 In their 26th open-air touring season, and renowned all over the world for their clarity, quality and ingenuity, Illyria return to their home-turf: Shakespearean comedy. Two sets of identical twins, separated at birth, unknowingly end up in the same city. More and more people are sucked into a vortex of mistaken identity including an Officer who is paid per arrest, a Goldsmith who hasn’t been paid at all, a delayed Merchant, an irate Courtesan and a mad Exorcist. To say nothing of a wife who sometimes feels her husband is two different personalities, and a poor Immigrant who is arrested for being the wrong nationality. And what exactly is the Abbess of Ephesus’s dark secret? Will anything ever make sense again?To cap it all, this year Illyria’s Shakespeare production is re-located to the town of Ephesus, Mexico, and is performed by our very own 5-piece Mariachi band, resplendent in ponchos and sombreros. Ay caramba!Recommended for adults and children aged 5+. Running time: 2 hours including 20 minute interval
Performance at the Manor Farm courtyard Ruislip. Box office details in due course